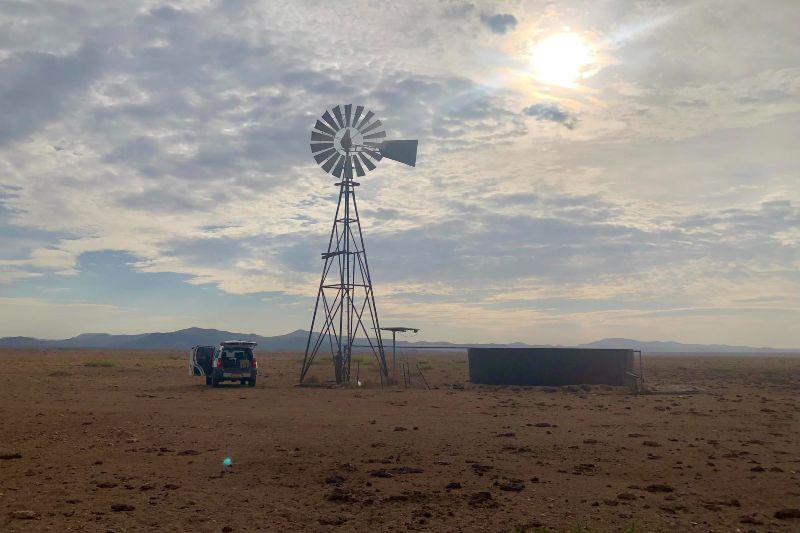 Excerpt By By MADISON STATEN, July 2021

Groundwater in New Mexico is a critical buffer in times of drought, providing millions with drinking water and helping with irrigation needs when surface water runs scarce. But measuring this resource can be challenging, complicated by geology and a lack of resources.

The first hours of daybreak find Ethan Mamer just south of Silver City. He’s standing underneath an old windmill enclosed by metal wire, measuring tools in hand. But it’s not the windmill that has Mamer’s attention, rather what’s underneath.

The hydrogeologist is collecting data on groundwater—measuring the level of water within this rural well. His reported findings will be added to the state database, helping to uncover more information about New Mexico’s groundwater health.

The well is down only a foot since it was previously measured last year, but Mamer says he’s seen significant drops at other sites.

“In the last year, year and a half, I have definitely noticed the water levels dropping, perhaps faster than normal,” Mamer said. “Yesterday, I saw a drop of 30 feet.”

Stacy Timmons is the Associate Director for Hydrogeology at the New Mexico Bureau of Geology and Mineral Resources. She says areas of the state that are disconnected from recharge and surface water are experiencing serious decline.

“There really is no new input to those aquifers,” Timmons said.  “So, the concern there is that whatever water they take out is water that’s pretty much gone for good.”

One area of New Mexico with stressed water resources is the village of Cloudcroft, where Mayor Bill Denney says one well has dropped production by more than half.

“Monday to Monday, we are losing more water than we’re bringing in every week,” Denney said. “I believe we are going to have to haul water in trucks to Cloudcroft to fill up some of our tanks so we can survive the summer.”

Just how many wells have gone dry is currently unknown—there is no statewide tracking system in place. New Mexico is not alone, nearby states like Colorado and Texas also have no mechanism for tracking the number of dry wells. Timmons says a self-reporting system has been developed in New Mexico, relying on well owners for data.