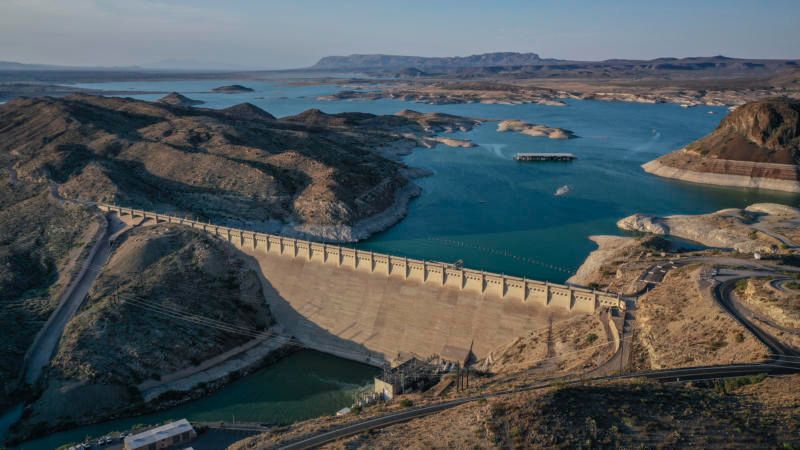 The images from Elephant Butte Dam are stark and frightening. Water levels have dipped to about 8% to 10% capacity and are projected to drop by a foot a day after the Fourth of July. Lines in the lakeside rock formation far above the current water level call back to years New Mexico had good snowmelt, monsoon seasons and full reserves.

But those days are in the rear view mirror and aren’t expected to return in any sustainable way in the near future. While marina owner Neal Brown says he tries not to slip into “doomsday” mode, water levels at Elephant Butte, a Bureau of Reclamation dam built between 1912 and 1916, could fall as low as 1% of capacity by the end of the summer. That could spell disaster for farmers below the dam who depend on annual releases for their crops.

As bleak as all this is, it’s perhaps not the most frightening aspect of the challenges facing Elephant Butte and the New Mexicans whose livings depend on it for agriculture and recreation. More chilling is the fact that what’s happening at Elephant Butte is symptomatic of the growing water crisis facing the West – and the fact too little is being done at the regional and state levels to cope with dwindling supplies and rising demand for water.

History shows us this part of the world has had devastating droughts before – including the Great Drought of 1276-99 that according to Britannica led the Anazasi to abandon their communities around 1300 AD. The drought is thought to have caused massive crop failure, and rainfall continued to be sparse and unpredictable until approximately 1450.

Today, climate change fueled by carbon emissions has exacerbated the problem. And the current drought is complicated by the fact burgeoning cities and agriculture mean a lot more people and demands on water sources.

The Colorado River, which feeds Hoover Dam, is severely over-allocated. “Politicians in the 1920s ignored science and promised more water to the cities and farms of the West than the river can deliver,” John Fleck, director of the University of New Mexico’s Water Resources Program, told the Hill newspaper. “Warming temperatures are making the problem worse, by increasing evaporation so less water can make it to downstream users.”

Water expert Kathryn Sorensen says the only viable long-term solution is we collectively use significantly less water from the Colorado River. Cities cannot solve this problem alone, she said, because “something like 75-80% of Colorado River water is used by agriculture. Everyone must contribute.”

How much do we know about our watersheds?