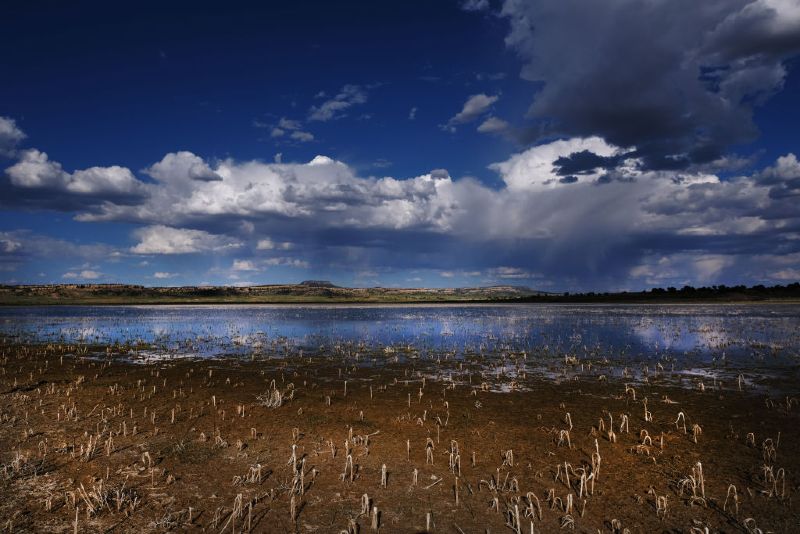 High above south-central New Mexico, satellite imagery shows a brown sea in arid Socorro County, broken up only by the Rio Grande, which splits the county and the state down the middle. Here in the northern reaches of the Chihuahuan Desert, it rains maybe 10 inches annually and the sun shines brightly 280 days a year.

Zoom in a little closer near a town called San Antonio and the scene remains barren. Seventy-six years ago the U.S. government decided to test its first nuclear bomb here at the Trinity Site, about an hour’s drive from downtown.

New Mexico’s yearly snowpack is trending down, along with overall precipitation, as the climate gets more trying for farmers.

However, alongside the Rio just south of town, patches of green break up the sandy dirt — farmland.

One of those farm sites is where Travis Harris has tended the land for most of his life. Now 55, he grew up farming here with his dad and grandpa. Today, Harris does the bulk of the work on 250 acres where he grows alfalfa and winter wheat. He also runs about 30 cows on another 75-acre plot of grass.

For irrigation, Harris gets about three acre feet of water for each acre of his land in a good year, his full allotment from the Middle Rio Grande Conservancy District. But water is growing ever scarcer in this part of the country. Available water is becoming costlier and worse in quality. In southern New Mexico, Chihuahuan grasslands, like those that cattle graze, are dying as the climate gets hotter and drier.